The most advanced, non-destructive ground reinforcement testing system1Note: for simplicity all types of ground reinforcements are referred to as anchors in this document available today, Roktel is a complete, user-friendly system in a small, light and flexible format. It is composed of a robust control & actuator unit with data capture sensors and a ruggedised hand-held PC graphical control interface; all components are rated IP65 as a minimum. The sensors and actuator system are designed to attach to the ground reinforcement, using quick attach/release clips and the actuator system communicates wirelessly (or by cable) with the operator interface, which has belt clips for ease of handling in awkward test situations.

Traditional assessments of structural ground anchor reinforcements such as rock anchors, soil nails or tendons involve using a hydraulic ram to apply a ‘pull’ stress of several tons to the anchor. If the anchor moves significantly it is considered to be substandard and replaced. If it doesn’t move by more than a few millimetres it is considered to be ‘good’ and normally left in place.

This method has several drawbacks:

Roktel is a fast, reliable, non-destructive method of triaging 100-200 anchors per operator, per shift. ‘Good’ and ‘bad’ anchors can be identified, together with the remaining length, level of corrosion, grout adhesion and voids.

The Roktel system is designed to determine the following in-situ parameters of the anchor:

In addition to the on-site indications of condition, internet-based comprehensive support and in-depth analysis is available online, with individual test reports provided.

The Roktel system comprises an ‘intelligent’ electronic actuator which ‘taps’ the exposed end of the ground reinforcement with a precise force, and dual sensors which capture the reinforcement’s vibration and acoustic response to the stimulus.

The force of the impact is selectable for different conditions or anchor sizes and the impact strength of the actuator is closely controlled by the patented actuator system to give perfectly repeatable impacts, not only for the anchor under test but all anchors in the series.

The sensor unit is a unique combination of acoustic and vibrational data collection and measurement. This combination is integrated by algorithms to determine the length, grout adhesion, voids, and degree of corrosion of the anchor under test.

The sensor data is measured and recorded by the complex electronics in the actuator unit, and transmitted to the graphical control and display programme in the ruggedised hand-held computer by wireless, or by cable for sites that are wireless sensitive.

An analysis programme in the ruggedised hand-held computer displays a graph of the vibrational data from the anchor, and assesses the condition, which is displayed in a ‘good’ (green), ‘bad’ (red) or ‘caution’ (orange) format.

The recorded data stored in the hand-held at the end of the test series is uploaded to the central analysis system for more in-depth analysis and the results are returned to the user in the form of a detailed report. 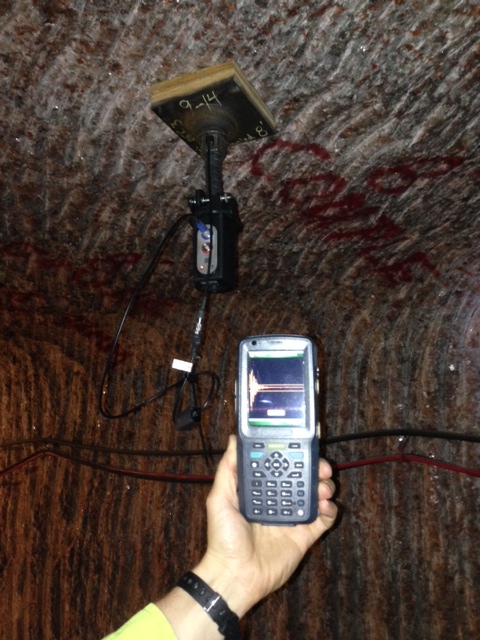 Is Roktel a new innovation?

The team that designed and developed the Roktel system has been the recipients of many national and international awards for innovation and applied technology. The first versions of Roktel were developed by CCPS in 2008. Earlier versions of Roktel have been in use in many countries for several years and have been proven to be capable of a high degree of accuracy in assessing in-situ anchor condition.

Does the system work, and is it reliable?

Actual operational testing has taken place on several thousand ground anchors of many types in many countries, including Canada, Australia, the UK, Austria, Indonesia, Greece, and the USA. Roktel assessment accuracy has been proven by extraction in many underground mines, bridges and ground stabilisation applications. To date, there have been no negative reports with regard to the accuracy of Roktel predictive analysis. Some types of ground reinforcements are more difficult to attach to, i.e., split-set anchors, and continuous development is always ongoing to increase the flexibility of the system.

It would seem simpler to tap the free end of the anchor with a hammer than invent a complex electronic metered impactor; however manual operation generates its own problems. It is often necessary to use several impacts to ensure the returned vibrational data is sufficiently clear to ensure an accurate analysis. When using a hand-operated hammer it is impossible to duplicate the force of a strike and the returned data is confused and more difficult to analyse (figure 1).

The patented electronic impactor in the Roktel system is accurately metered to use the optimum force required, avoiding confusing responses and ensuring clear data for subsequent analysis (figure 2).

There are several other difficulties in testing rock anchors using impact analysis, for example:

The patented Roktel system has been designed to avoid or overcome these problems. The intelligent actuator assembly is designed with a unique, patented ‘floating impact’ mechanism to reduce transmitted vibrations to the anchor during operation and the whole assembly is specifically optimised for reduced size and mass. The impactor system is designed to clamp on to the free end of the anchor, lining up the impactor itself is directly in line with the centre for testing.

There are three operational components in the Roktel system:

The sensor unit quickly clips on to the free surface of the anchor, using a specially designed attachment, and the actuator assembly is clamped to the anchor end. This takes only a few seconds and leaves the hands free. Once started, the test itself is completely automatic and the results may be viewed graphically on the hand-held display. Again it takes only seconds to unclip the sensor and actuator units, and the user can move on to the next anchor.

The Roktel system uses several specially developed algorithms to assess the data and detect problems in the anchor under test.

The above test was carried out on bridge anchors in Western Australia. Although not immediately apparent, when analysed, the differences in the data of the two responses above clearly indicate that the anchor in graph 1 is in reasonably good condition with only minimal corrosion, while the anchor in graph 2 is poorly grouted, with significant corrosion present.

Both anchors were accurately determined to be 2 metres in length.

Both the actuator/data collector unit and the ruggedised hand-held computer are sealed to IP65; the sensor unit electronics are sealed to IP66. The system is battery operated and powered from low voltage. All units retain operability after drop testing from a height of 1 metre to a concrete surface.

The hand-held computer unit can optionally transmit and receive data from RFID tags. Thus tested anchors can be easily and quickly tagged with the date last tested for reference, comparison with later tests, or identified as specific anchors which should be monitored or re-tested.

The actuator/data processor has a battery hold-up time of up to 18 hours of normal use; tests have proven the unit capable of up to 800 anchor tests with 5 impacts per anchor during that period. The hand-held control & display will operate for up to 13 hours, dependent on the type of usage.